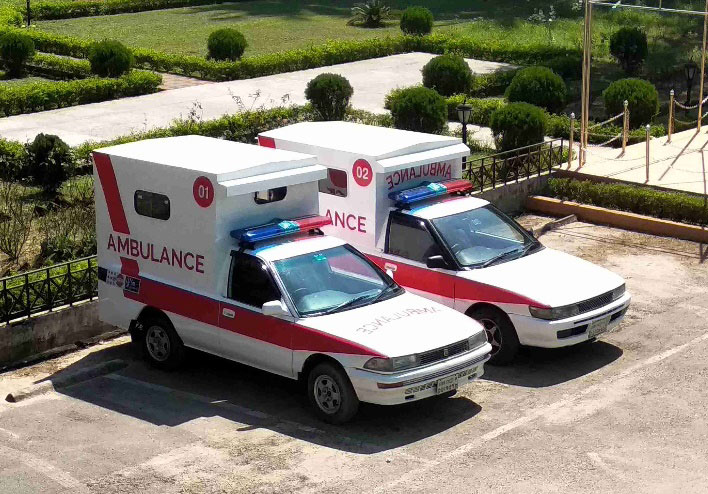 Handed over two units of Low-cost ambulance to UNFPA for carrying patients from Rohingya camp to health complexes.

a2i Innovation Lab on Thursday  handed over two units of self-innovated ‘low-cost ambulance’ to Research Training and Management International at Cox’s Bazar Circuit House for carrying patients from Rohingya camp to district and upazila health complexes. These low-cost ambulances are manufactured by using local technology under the direct supervision of a2i Innovation Lab and powered by the Department of Cabinet Division of Information and Communication Technology, USAID and UNDP. The ambulance was initially invented by Jessore’s Mizanur Rahman. This ambulance can carry a patient and two passengers, and the mileage is 25 km per liter. The minimum cost to build the ambulance is Tk 3.50 lakh, but the cost of ambulance can be slightly increased depending on the expertise. This low-cost ambulance is awarded in the 9th round of a2i Innovation Fund. The invented ambulance can be used to provide primary health care services to remote areas of the country or patients who use advanced ambulance services can be used for bringing food. The United Nations Population Fund (UNFP) has purchased two ambulances for its cooperation in the Rohingya camp and its partner organization RTMI International operate it. Refugee Relief and Repatriation Commissioner (RRRC) Mohammad Abul Kalam, Joint Secret, Md Abdus Sobur Mondal, UNFP’s Chief of Health Satyanarayan Dorsashmi and UNIFP’s Partner Organization RTMI Executive Director Sayed Jaglul Pasha was present at the ambulance awarded program. Deputy Commissioner of Cox’s Bazar Md Kamal Hossain presided over the event.